Reports and information on Past Events

Summer 2021 was an interesting one for the Black Sturgeon Sailing Club.
Typically, the Club has a few months to get boats ready and organized before the races and lessons start. However, being in Ontario, we only had a week to get organized and ready, once the Provincial boarder opened up.
We added 4 brand new Prams (kids sailboat) to the mix, which brings our Pram and Opti fleet up to 6, in addition to the 2 – 420’s and 2 Lasers we have. This now allows us to run lessons whenever we want, without having to rely on the mobile school exclusively. As a result, we ran two, 5 day weeks of lessons and enrollment was 46 kids and adults. A number of students received their Can Sail 1, 2, 3 and 4 Levels which is fantastic.

On another important front, the Club now has 3 newly trained instructors living on the lake, which brings us up to 6 instructors. We expect to utilize most of these folks next season. For those who might be interested in instructing in the future, please let us know. Instructor wages start at $15 and go up to $22 an hour.

In the past couple weeks the Club has procured a new dock system which should allow us to begin storing and running lessons out on American Island next season – we will see how this plays out over the winter.
Finally, we only had a few races this year due to a hectic season all around, but we did host the inaugural Commodore’s Plate and Roger Burns took home the hardware. This race was pretty funny as all participants (mainly middle aged men) were told they could only sail in Prams.

Special thanks to our instructors this year; Gabe (Sail Manitoba), Aislyn, Lauren, Teun and Megan and a huge thank you to Black Sturgeon Camps for letting us use their property to run Covid friendly lessons, as well as thank you to Sweet, Lake of the Woods Chocolate Shop  for the fabulous instructor gift bags…YUM!!!

Sixteen (two women and fourteen men) volunteered for the much needed cleanup of Thatcher Road.  Brush and dead trees were cleared and many potholes filled making the road much easier to use. The morning of work finished with a BBQ on the association’s new portable BBQ. Thank you to all those that came with their own equipment including Lawrence Maksymetz, whose front end loader was so useful. Thanks also to Steve Garrett who planned the BBQ and Phil Burns who initiated the work-bee. Well done!! A morning well spent! Click on a pictures to see the full size version.

The annual horseshoe tournament on Sep 1st was a huge success. There were 23 teams made up  by random draw competing for prizes and horseshoe supremacy. About 60 people attended at The Glen on a perfect sunny warm day.  The winning teams each consisted of a lake resident and a guest.

A-side winners Ridley (one of the youngest) and Jodi

Don’t miss the fun next year!  Everyone welcome to join or watch and visit with your lake neighbours.  For those who don’t know where The Glen is, it is at the end of Lakeview Trail off Peterson Rd. (Black Sturgeon Estates Road)

Wow!!  What a turn out to the work party. We guesstimate that close to 35 people came out Aug 19 and hacked back the shoulders and worked the road. It was hot work, but with so many folks grinding away we were able to open up the sight lines from the highway down to the launch.

The road itself received seven loads of gravel which was worked in by Rob Parent and Mike Stephenson who volunteered their time and personal tractors to the task.

Thank you to all who came and helped out. This is a big reason this lake is a such great place.
When you use Thatcher next time remember who keeps this up and don’t take it for granted.

The horseshoe tournament is back! Over 50 people attended at The Glen on Sep 2 on a warm sunny afternoon.  There were 24 teams to contend for the trophy and bragging rights.  With 8 of the teams on the go at one time, there were plenty of spectators and cheering gallery.

Under the direction of Nikki LaSpina, with assistance of Glen Foster, everything went smoothly and the 4 horseshoe pits were kept busy.

Everyone had a good time.  Thanks to all who helped get The Glen ready and the pit crew who manicured the sand between the draws.

The Glen is  a public park, with a playground structure and the horseshoe pits, at the end of Lakeview Trail, which is off Peterson Road.  The horseshoes are in a bin next to the outhouse – so come anytime and get practiced for next year.

The fifth annual Black Sturgeon Lake Sailing School was successfully concluded this past July with two full classes of adults and kids participating with lots of excitement and fun. The weather was favourable both days, although there was a brief delay on Sun pm for a high wind squall to pass. The BBQ at the Melnyk’s was well attended. Thanks to all the folks who volunteered loading and unloading the boats at Snow’s and for lending boats for use in the school.  We look forward to next year. 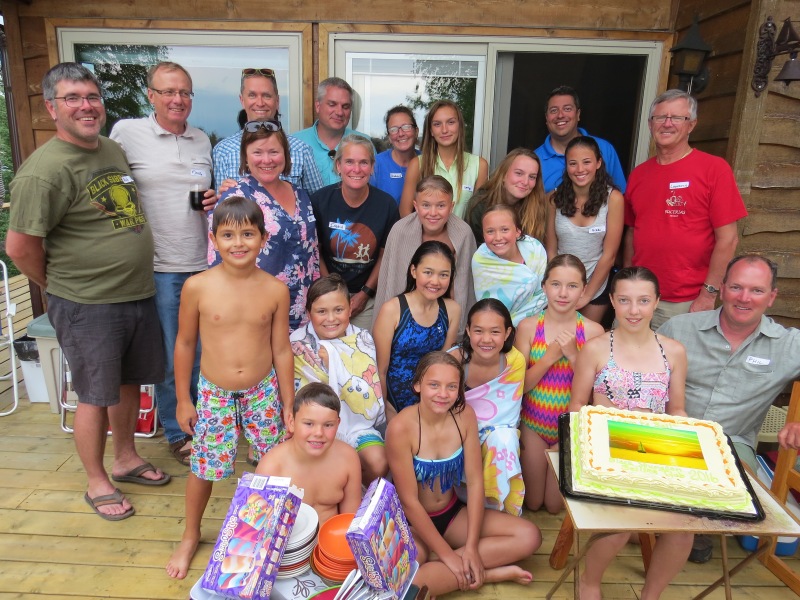 Most of the sailors and cake at the BBQ

Sunday Sep 6, there were 12 boats out on the water for the race (and 2 cancellations) – what a sight to see!  Unfortunately, the weather was not cooperative for sailing – no wind.  So…one race of drifting/paddling/sculling, etc. then retired to the dock for refreshments and social.  Great day of getting all the local sailors together.  For sure to be repeated next year.  For more info contact Ted and Marnie Melnyk  mtmelnyk@gmail.com or Phil Burns  phil.burns@nbc.ca

Group Photo of the Sailors

At the Race Start

The third annual Black Sturgeon Lake Sailing School was held this past July with two full classes of adults and kids participating. There were 14 kids (ages 7-15) and 16 adults who sailed over the weekend of the 19th/20th. As in previous years the winds were light on the first day but this being an abnormal year the wind picked up on Sunday and those who got on the water in their boats were treated to the wrath of the South Wind. All in all it was a lot of fun and you can expect to see the school back again next July.

Thanks to all the folks who volunteered loading and unloading the boats and thanks to my neighbours the Brauns and Browns for lending their docks to the cause and to Ted and Linda Evans for letting us use their little boat as a coach boat for the weekend. Also, a special thanks to Karl Snow of Black Sturgeon Camps for letting us load and unload at his place again this year.

Sun Jul 6.  A dog on Sunset Trail was killed by the wolves this morning. Also, one wolf was seen on Mineault Road.  Everyone with dogs and those that are walking on the roads be aware and take precautions.

Fri July 4, Cathy Wiseman and Leanne saw 2 wolves coming out of the gravel pit heading off into the bush by Reidigers . They watched them go into the bush and come out in the Moncrief clearing where two more were lying in the tall grass and joined them. They did not appear to be threatened at all. That makes 4 wolves for sure, so wanted all the walkers especially those with dogs to be alert. Too close for comfort.

Many thanks to the volunteers (see picture) who came out Sunday June 29, 2014 to help with the cleanup along Peterson Rd.  Despite the growth along the roadsides and in the ditches, it was amazing how much junk/garbage was picked up. We had a team of helpers in the sandpit who did a great job of picking up all the broken glass from bygone parties. It took only a hour and it was time well spent! As a further note, we are planning on doing this once again, but most likely it will be held May long weekend before the green starts to grow (and mosquitos make their presence known)! 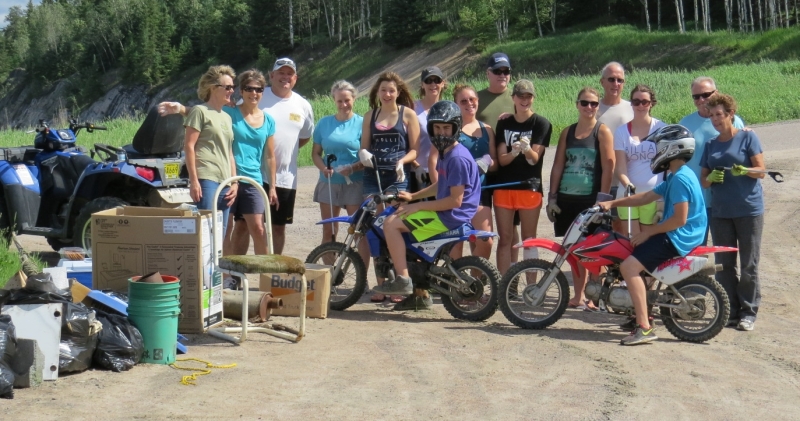 The AGM was held  Jun 21 at the Minis Hall, Super 8 Motel in Kenora. About 50 members attended. Mayor Canfield was the guest speaker and the Mayor did a good job covering the taxation issues and many of the behind the scenes issues.  The press also attended and the discussion was covered in the paper.  See the newspaper article.

Sunday May 18. The SeasonOpener2014 was a
great success and well attended.  The threatening rain held off making for a wonderful evening of renewing lake friendships.  Thank you to Frank and Michelle Hinks for hosting.  On with the summer!

Jul 13/14 The sailing school, organized by Phil Burns, was full and had great weather.  Light winds for the first day, brisk winds for Sun morning causing a few dumps bur perfect fresh breezes on Sun afternoon.  The BBQ at the Melnyk’s was attended by lots of both adults and kids.  Keep next year in mind if you missed it this year and look for more sailboats on the lake.  Here is a picture of the kids on the water on Sunday.